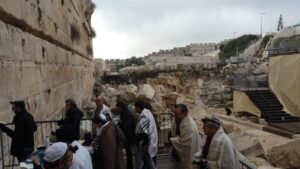 These are the words we could have read exactly one year ago today, January 31, 2016, regarding an agreement that that the Israeli government had reached with Conservative and Reform organizations in Israel and the United States and the Jewish Federations of North America:

A historic compromise that redefines the relationship between religion and state in Israel has been reached! After 25 years of fraught negotiations, for the first time in the history of the State of Israel, non-Orthodox Judaism has achieved formal status in our holiest of places – the Kotel.

Finally, there will be one Kotel: Walking through one common entrance, visitors will be able to choose which part of the Kotel they would like to pray or visit – the Northern Plaza of the Western Wall which respects Orthodox custom, or the Southern Plaza that respects the egalitarian traditions of both Conservative and Reform Judaism…Every month, Women of the Wall will be able to pray, undisturbed, in the Southern Plaza.

What a wonderful accomplishment, rooted in mutual understanding and acceptance, that would have been! Yet, one year later, the situation remains unchanged.

Not a single clause of the Kotel agreement has been implemented. The government of the State of Israel has refused to act. In fact, the Knesset now has a bill before it that would outlaw any non – Orthodox services at the Kotel.

This morning, I went down to the Southern Plaza (Robinson's Arch) with my fellow Conservative Yeshiva students to daven and celebrate the son of the Yeshiva's co – director putting on tefillin for the first time (pictured above). The area where men and women can come together there to pray is very compact…and if the bill now before the Knesset passes, this small egalitarian area will disappear.

And the Prime Minister? What has he said or done to achieve some progress on this issue? Unfortunately, Prime Minister Netanyahu has remained largely silent.

The Kotel, when it was liberated with the rest of the Old City in 1967, was never meant to become an Orthodox synagogue. It was supposed to be a universal gathering place potentially for all Jews, a place where one might sense the presence of God and a holy people, in powerful ways.

It did not become that uplifting place. For many Jews who care about Jewish pluralism and egalitarian worship expression, the Kotel, at least the Northern Plaza that all of us know as "the Kotel," has become a painful place that reminds us of the senseless and harmful divisions within our people.

I pray, as I hope you do, that a wise and caring spirit will eventually triumph and the Kotel Agreement, which brought such joy and optimism one year ago, will be implemented.

To be honest, to maintain the status quo at the Kotel or, worse, to change it and make it an even less welcoming and inclusive space, will only contribute to harming the spiritual well – being of Israel and its relationship with world Jewry.

May the anniversary of the Kotel Agreement next year be a much happier one than it is today.

The snowshoes are properly in place and tight. Walk. Ascend. Stop to rest. Continue to walk and ascend. Stop. Look at the vast snow-filled mountains and valleys that panoramically lie before me.

Listen but not to any audible sounds. Listen again. I hear… the silence.

Not here. Not in the magnificence of winter's glory. I look out, and I hear the silence that is like no other silence.

Our midrashic tradition teaches that when our Israelite ancestors recognized the presence of the Holy One at Mt. Sinai and received Torah, what God gave was not the entire Torah or the Ten Commandments. No, what God gave was a single, silent Hebrew letter, the first letter, Alef. In a sense then, God gave the Israelites a unique, divine expression of silence. Through this gift of divine silence, our ancestors became aware of God's presence in new ways and developed a relationship with the Holy One as embodied in Torah.

Today we continue to share in that relationship. But are we really aware of its origins according to the midrash?

On the mountain, I heard silence… and recognized the blessed presence of the Holy One.

Yes, friends, I am in Utah, where I have just spent a couple of days snowshoeing in Park City. I am now in Moab (you can't escape the Bible in Utah!) Where I will do some hiking in Arches and Canyonlands National Parks. This Shabbat I will be in Los Angeles where I will continue my Shabbat services congregational visits. Two weeks from now, God – willing, I will be in Israel, already immersed in my classes at the Conservative Yeshiva! I really am looking forward to that "immersion" and to sharing something about it with you in my next sabbatical message.